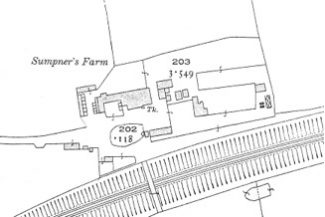 In 1904, the Poplar Poor Law Union set up a men’s ‘labour colony’ on the 200-acre Sumpner’s Farm it had purchased at Dunton near Laindon in Essex. Instead of entering the Poplar workhouse, unemployed men could work at the colony while their wives and families received ‘out-relief’ – money or food. The colony, for up to 100 inmates, was intended to provide productive labour for the men — farm work instead of the usual workhouse tasks of stone breaking and oakum picking — and to encourage self-sufficiency. A wealthy American philanthropist Joseph Fels financed the scheme.

Little was spent on adapting the existing farm buildings. A dormitory and dining-hall were provided from two second-hand iron buildings, and a new laundry, lavatory block, and superintendent’s house were of cheap construction. 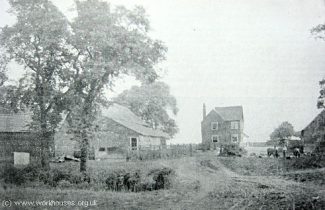 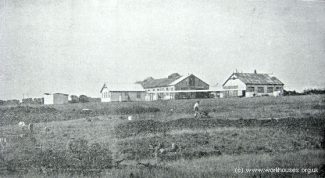 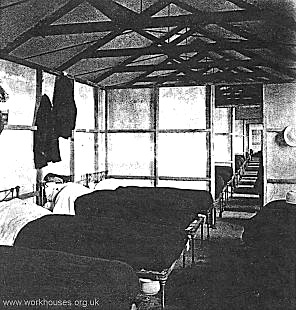 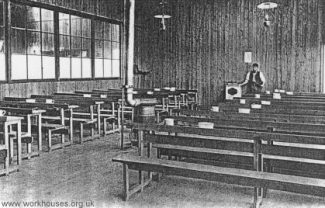 In its early days, the scheme was hailed as a great innovation. A glowing report of the scheme appeared in the London Illustrated News:

At their own request about four months ago, one hundred men were taken from the Poplar Workhouse and transferred to a labour farm colony at Laindon, in Essex, where they were employed on the land. On March 5, 1904, Mr. Joseph Eels, an American gentleman living in London, handed over to the Poplar Guardians a farm of a hundred acres, on condition that it should be worked by the able-bodied unemployed under their charge. At present all the Laindon colonists are housed in corrugated-iron buildings on the estate; but as the men have been so well-behaved, and have proved themselves such willing workers, it is being mooted that they shall be paid a weekly wage of some thirteen shillings, and be quartered as lodgers in the cottages of the surrounding district. If this were done a saving of about two shillings per head would be effected, and the men would gather the fruit of their labour. One man’s individuality is mainly responsible for the colony’s striking success in ‘man-making’ — that of its superintendent, Mr. John Clarke, a born organiser. Everything goes at the colony with almost Kitchener-like precision, from the constructing of a reservoir to the building of chicken-houses. He varies the work as much as possible, so that a man may not be sickened with the monotony that would arise from sticking an eight-inch fork into a hard clayey soil week after week, month after month. The favourite job of the colonists has been the making of the reservoir, as the gang is larger and therefore livelier than any doing fieldwork, and there is always the pleasure that comes from construction. These men have the pride of builders upon them and feel themselves more than a cut above the others.

Problems soon arose, however. There was no high wall surrounding the colony site and as a result men regularly slept out, begged, and frequented local public houses. The land, of an areas which would normally have required only four labourers for its cultivation by plough, was instead dug over and over by the men with spades, a practice which became as futile as the work it was intended to have replaced.

The experiment was not successful, with discipline being poor and little labour being performed by the inmates. The initial colony scheme ended in 1912. However the site was retained by the union and continued to provide accommodation for able-bodied male paupers.

In 1930, control of the establishment passed to the London County Council who retained the site, renamed Dunton Farm, for the accommodation of up to 150 older men. The LCC improved and extended the buildings and installed electricity. Stock, arable and fruit farming were carried out by the inmates, and training was provided in most branches of agricultural work, and also in kitchen gardening, poultry keeping, carpentry, and estate repair work.

This article is reproduced with the kind permission of Peter Higginbotham at www.workhouses.org.uk. This site is an excellent source of information regarding the Union Workhouses and conditions there in.

See what became of the Colony