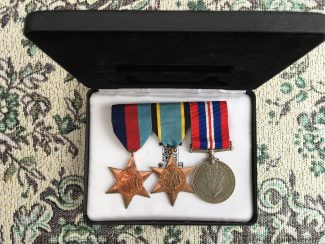 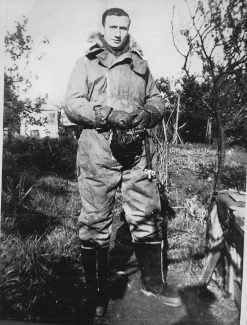 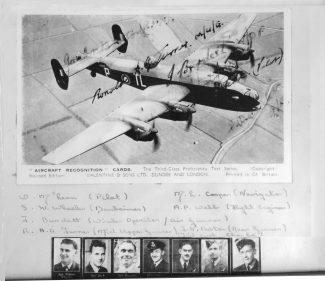 The Hurricane and Spitfire were the two iconic fighter planes that won the titanic struggle in 1940 over Hitler’s Luftwaffe in the skies over Britain, in what became known as the ‘Battle of Britain’.  Their success put pay to any planned German seaborne invasion.  The battle, instead of being our darkest hour, became our finest. What did Churchill say “Never was so much owed by so many to so few”.

Although the Hurricane and Spitfire continued to protect our shores and cities it was Bomber Command who took the fight directly into the heart of Nazi Germany, with nightly bombing raids. In so doing, half of the 125,000 men who served with Bomber Command lost their lives. One such man was 22 year old Sergeant John Charles Burdett, when his Halifax Bomber LW430 was shot down at 10.30pm above the German town of Torqau near the river Elbe on the 24th March 1944.

John (known as Jack) was born on 17th September 1921 in Stratford. Early in his life the family moved to ‘Ontares’, Bedford Road, Laindon, where he went to Laindon High Road School. On leaving school he became a shoemaker before enlisting into the RAF at Uxbridge on 25th February 1941 (age 19) as Aircraftman Second Class (AC2), serial number 133442.

He trained as a wireless operator and air gunner and on 20th March 1943 he was elevated to Leading Air Craftsman (LAC). Three days later he was promoted to temporary sergeant. He eventually joined 158 Squadron based at RAF Lissett, Yorkshire on 6th September 1943 and on 31st December 1943 he was made full sergeant. The squadron was initially equipped with Halifax BM MK11 heavy bombers. In January 1944 the squadron was re-equipped with MK111 and on the 7th January he moved with the squadron’s ‘C’ flight to form the 640 Squadron at Leconfield.

The seven man crew left RAF Leconfield on the 24th March at 7.06pm in their Halifax LW430 to join one of the heaviest and last major raids involving 1000 aircraft on Germany cities.

Unfortunately high winds gusting up to 100mph blew the formation off course into the paths of German night fighters and heavy ground fire. Bomber Command lost 72 aircraft that night (44 Lancaster bombers and 28 Halifax bombers along with 504 men) shot down over enemy territory in the raid. It was one of their biggest disasters.

LW430 was hit by a Messerschmitt and William Mcleod the pilot officer attempting an emergency landing, clipped the tops of trees, the bomber exploded and crashed killing all on board. The Messerschmitt pilot Karl-Heinz Zeeler toured the crash site the following day. Karl himself was shot down and killed in the last months of the war.

The German team from the “Arbeitsquappe Vermisstenforschung“ (Missing Persons Research Group) discovered the wreckage on 27th September 2003. They recovered the remains of at least five members of the crew but it has proved impossible to identify them. It appears that two of the airmen had either parachuted out or had been thrown clear and locals had them buried in Anaburgh Churchyard, nearby, although the sites have not been found. The bomber had in fact been shot down in the Russian Zone and due to the Cold War episode, it delayed the search.

Relatives of the seven airmen were traced and many of them attended the funeral service in St George’s Church, Berlin and at the graveside in Berlin Military Cemetery on the morning of 1st September 2005. Later they attended the unveiling of a plaque at the crash site with Herr Jens Bechler who led the recovery operation.  The memorial stands in a hole cut through the trees by the Halifax.  It is a simple stone statue with a brass plaque detailing the event, “Five airmen of the 1939-45 war, members of the crew of Halifax LW430”.

One of the items recovered from the site was a post card with signatures of all the crew.

John sister June Llewellyn (Burdett) of Powell Road, Laindon attended the services. She was only seven at the time of John’s death. She explained that her long since deceased parents Mary and Jack had initially been told that John was missing. Three years later the Ministry Defence rung to say they presumed he had been killed. On the visit June took her brother’s flight log book and it revealed that the crew had flown together on 19 sorties in just over nine months. One more sortie and they would have qualified for leave.

June went on to say: “They flew together, died together and now going to be buried together—after all these years, I will feel like I have finally put him to rest.  I am so proud of him. I was over the moon when I read he had been found. I felt like I had won the lottery. I think this is a miracle – over the years you would wonder what happened. I used to go to the Laindon memorial on Remembrance Day, because that is the only thing you can do when you have nothing – I have happy memories of him, I used to polish the buttons on his tunic and mother used to send food parcels to him”.

Then on the 18th September at St Gabriel’s Church, Pitsea, June attended the 65th anniversary of the Battle of Britain service, before joining a parade to the memorial in Howard’s Park. Through tears June said: “I normally go to a church in Laindon for Remembrance Day but this was different as it was sort of the close of a chapter – I’ve laid him to rest. I did it for Jack and the rest of my family who have passed on.”

June has in her possession, John’s medals:  War Medal 1939-45, 1939-45 Star, Air Crew Europe Star, he also received a ribbon to go with the 1939-45 Star along with Good Conduct Badge (Ist).  He is remembered on the Runnymede Memorial and hopefully he will be commemorated with a road name on the new housing development in Dry Street, Langdon Hills, ‘Westley Green’.