Joy has lived in Billericay since 1971, however like many people she still remembers Laindon with great affection.

Joy has lived in Billericay since 1971, moving there a few years after marrying Robert at St Nicholas Church. However like many people she still remembers Laindon with great affection. This is her memories of living in Laindon

The family moved to Laindon in 1953, it was a lot different to how it is today. My parents, sister, four brothers and myself left a three roomed bungalow in Pitsea and moved into a four roomed prefab in Victoria Road. We had a bathroom and a flush toilet for the first time, plenty of cupboards in the kitchen and a hot water heater. 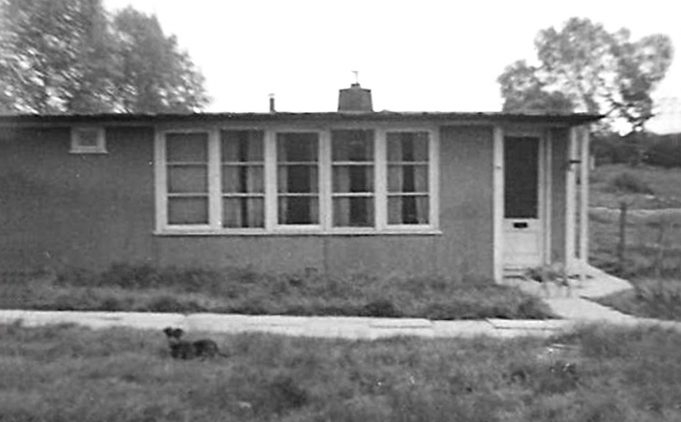 The bungalow we had left and spent our early childhood in only had a Butler sink in the kitchen with no main drainage. So to suddenly have these “mod cons” was wonderful!

At that time Devonshire Road was unmade from Powell Road to Victoria Road. There were some bungalows on the right hand side of Devonshire Road but the left hand plots only contained the remains of bungalows that had been abandoned before we moved into the area. There were numerous fruit trees and the ruins of old sheds in the gardens and for some of the time, this was our playground.

Manor Park was about a minutes walk away and we spent a lot of time there. We had much more freedom then than children have today, or even when our own children were growing up. We would walk down the unmade part of Victoria Road to the ‘Lily Pond’, where we would try to catch little fish that could be found there – it seemed a long walk in those days.

One of the things that were different to Pitsea was the amount of shops along the High Road that stretched from the ‘Fortune of War’ (this well known Public House was a favourite stopping place for coachloads of Londoners, en-route for a day in Southend-on-Sea. Sadly it no longer exists and has been replaced by yet another development of flats and houses on the A127 Arterial Road, opposite McDonalds) to Laindon railway station. Further shops could be found in Langdon Hills High Road that continued south of the railway and were strung out on both sides of the road as far as Samuel Road. There was a parade of shops a little further along just before Langdon Hills Primary School on the east side of the High Road, known as Nightingale Parade. On the other side of the road just past the school there was a small parade, opposite the entrance of Lee Chapel Lane, of three to four shops. Finally, a little further up the hill was the small thatched roof Post Office, near the Crown Hotel public house, completing the shops that were available to Laindon and Langdon Hills residents. Every thing that was needed could be bought at these establishments.

The eastern end of Victoria Road at the crossroads where it met Railway Approach in common with Topsham and Merrylands plus numerous other roads, were typical of the roads in the more remote parts of Laindon and were known as the ‘back roads’. In winter, these roads were ‘no go’ areas for tradesmen’s vehicles, in particular, coal merchants, due to the impassable conditions. All these back roads were unmade, with isolated bungalows dotted here and there. In the late fifties and early sixties, starting with Devonshire Road, saw new social housing emerging from the chaos of the ‘back roads’. 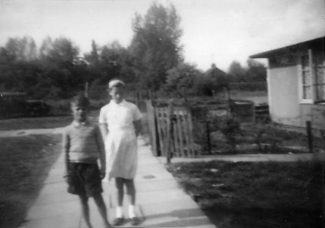 Joy and her brother Raymond outside their prefab

My brother Ray and I started at Langdon Hills School the day after we moved into the area. It was a long walk as there wasn’t a primary school any nearer to Victoria Road. Markham’s Chase and Laindon Park Schools were of a similar distance from where we lived. There were no other primary schools around at the time. We took the walk in our stride, as it had been a long trek to our previous school in Pitsea and we were by now used to walking almost everywhere we wanted to go.

We didn’t have the luxury of cycles, except for the one that my father owned to get to work on. Sometimes my friend and I would walk what we called the back way to school. Along Railway Approach as far as the railway bridge, through to Berry Lane, then wander along the cinder path past the clinic to the bottom of the railway bridge at Florence Road and on to school or carry on through Berry Lane to Alexander Road and down to the High Road.

Rob, my husband, who lived in Alexander Road, Langdon Hills, before moving to Devonshire Road, tells me that the canteen at the school used to be opened during the summer holidays and provided meals for some of the local children, ensuring that they got at least one hot meal a day. I wasn’t aware of this but we did live quite a distance from the school.

On occasions we would go to what we knew as the ‘Second Rec’ at the bottom of New Avenue in Langdon Hills (the ‘First Recreation ground’ being close to where we lived in our prefab). There was a paddling pool at the Recreation Ground in Langdon Hills which we often used in the summer holidays. We both then moved on to Laindon High Road school, which was much closer.

My mother took me to the Radion cinema (known as the flea pit) as a treat one evening and there was a terrific thunderstorm while we were there, the power failed so everybody had to leave the building. It was raining so heavily when we got outside that the drains couldn’t cope with the deluge and we had to paddle home through the water.

Our doctors were Dr Long and Dr Garson, who had their surgery at the ‘Hiawatha’ on the corner of St Nicholas Lane and the High Road, opposite the Police Station. I believe Dr Garson emigrated (I think) to Canada. 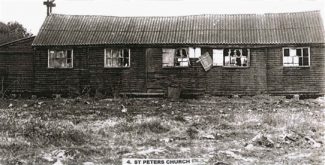 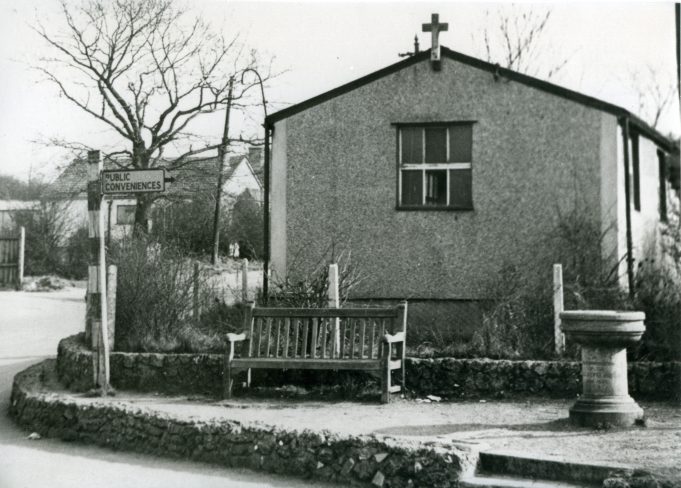 Opposite the surgery on the other corner of St Nicholas Lane was the hall (St Peter’s Hall) where I attended Girl Guides.

The Memorial Hall was in the High Road, which was well used for dances, amateur shows etc. I remember I took part in a talent competition which was held there. I don’t recall whether this was a regular event or a one off. I stood on the stage and recited a poem called ‘In disgrace’. Needless to say, I didn’t win!!

These are a few of the things that spring to mind when I think about the years that I spent in Laindon and I look back on these times with fond memories and a sadness that it is all so different now. However, things change and improvements are made, perhaps not always for the best. The way we live now, many things are taken for granted. We had few basic comforts in those far off days of my childhood. Just enough to eat was a luxury, never mind all the electronic gadgets that are a ‘must have’ for the children of the Twenty First century but if change and progress did not take us forward, we would still have the ‘back roads’ lit by the occasional gas lamp if you were lucky enough to have a gas main in your road!