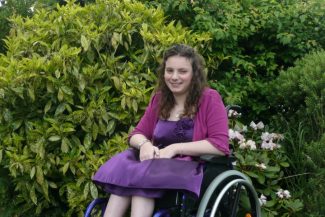 20 years Old Lisa Marshall, granddaughter of Rita and Charlie Clark has been chosen to carry the Olympic Torch this summer. Unfortunately not many of us will be able to see her as she will be carrying the famous flame for 300m during the relay in Lowestoft but you bet that her family will be there in force to watch her.

It was her mother, Sheryl who wrote off to Coca Cola last year and put her name forward after Lisa had gone through three major operations in four years. Lisa as you can imagine is over the moon. She told the Echo “Being chosen to be part of the Olympics is so important to me. It is a way for me to get closure on a very difficult time in my life”.

Lisa is a Cerebral Palsy sufferer and has spent years suffering and undergoing operations for symptoms related to her condition but to all those that know her she has remained positive.

Previous to this her greatest enjoyment was when she achieved four As, four B and two Cs at GCSE level followed up with two Bs and two Cs in psychology, sociology, politics and psychology at A Levels. She delayed a hip operation so that she could take her exams and because of it spent most time in bed only going out to take the exams.

It is her incredible story that obviously led her to be chosen out of the thousand’s of people to be an Olympic Torch Bearer.

Lisa is currently in her second year at Bournemouth University studying to be an Educational Psychologist. It is her ambition to become an educational physiologist so that she can help children with special needs so she can help them do well at school, despite their difficulties.

Lisa went to Mill House Junior School, Laindon and then onto St. Martins, Hutton and I bet they, like us will be rooting for her.