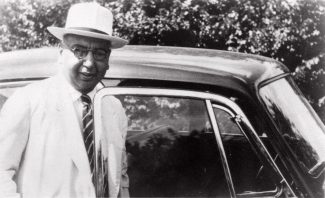 zoom
Dr Chowdhary with his Daimler 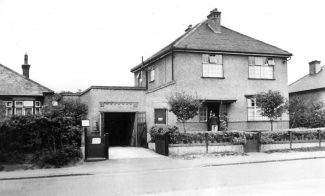 My father, Dr Dharm Sheel Chowdhary was born in a small village in Punjab India in 1902. He was sent to a Hindu boarding school at the age of 7 where the regime was physically  strict and the academic teachings intense, equipping him with an extensive knowledge of Indian and Persian literature, Hindu philosophy and religious teachings and a good knowledge of the ancient language of Sanskrit. On graduating, he was ordained as a Hindu priest but as far as I am aware did not go on to practise as such, choosing instead to enrol at Lahore Medical College to study medicine.  He graduated with an MBBS in 1927 and came to London for post graduate studies the following year. He obtained further qualifications in Edinburgh and Liverpool as well as London. In 1931 he joined Dr Gilder’s practice in Laindon, purchasing the practice from him when he retired. My parents had married before my father came to England and my mother joined him in Laindon in 1932 providing much needed support. After a short spell living at York Villa, they moved to Daisybank, a four bed roomed house in the High Road with a large garden at the back and the surgery at the side. Their son Vijay later known as George was born in 1935. He sadly died in 2000. Their daughter Shakuntala now known as Shakun was born in 1938 (myself).

My Father’s reputation as an approachable hard working, family doctor was soon established. The combination of his medical skills and his compassionate nature enabled him to more than fulfil the expectations of his patients. People came to regard him as a true friend and would seek his advice about all sorts of issues as his wisdom and knowledge were much respected. He made it a point of getting to know his patients well and the attention and care he gave to each of them was not compromised, home visits and surgery consultations were never subject to time limits, even when the practice expanded and the number of patients increased to 10,000. He is said to have sat by the bedside of dying patients giving comfort by reading their favourite pieces from the bible or simply talking to them as a friend. On the other end of the spectrum, he often spent hours with young mothers having a difficult lengthy labour before giving birth. If he was delayed for morning surgery an announcement would be made in the waiting room but most patients would just stay put awaiting his return without complaint.   His commitment to his patients meant however that he paid a heavy price as even though he took on assistants, his working hours stretched from 8:30am to 9 – 10 pm with a break during the middle of the day for lunch at home. After evening surgery I remember him staggering in, looking tired out and sitting down to a delicious curry supper prepared by my mother who was a wonderful cook.  These meals were clearly a highpoint of his day as he loved spicy Indian food with lots of chillies – after finishing, he would mop his brow – go and sit in his armchair and invariably fall asleep. This was not however necessarily the end of his day for the telephone might ring and off he would go to visit an emergency case or deliver a baby. This could take all night and we never knew when to expect him back. On other occasions he would be called out to deal with domestic violence, child abuse and many other social problems which today would be dealt with by social workers and mental health professionals. While he was out, my mother was left to cope with any other distressed folk who telephoned or rang the doorbell.  Callers were invariably asked in for a cup of tea and a chat and left feeling calmed by her comforting presence.

Accident and emergency cases were also frequently dealt with at the Daisybank surgery particularly at weekends. As a child I saw some gorey sights which often gave me nightmares. During the war, my father served in the Civil Defence and was in charge of the Laindon First Aid Post attending to bomb casualties. He was also a captain in the Home Guard. In recognition of his 29 year record of voluntary service as Divisional Surgeon for St John’s Ambulance Brigade he was appointed a Serving Brother in the Order of St John of Jerusalem.

After a series of doctors, Dr Noel Rubie joined my father in 1952. A most supportive colleague, he subsequently became a partner in the practise, thus alleviating some of my father’s heavy workload and becoming a lifelong friend.

My father became affectionately known as Doc or Uncle Doc to children. He always drove a Daimler, which he said was his one extravagance. He was therefore easily identified as he did his rounds around Laindon and the surrounding area. He had what we would now call a wicked sense of humour and was a great raconteur of jokes both in English and Punjabi.

Both my parents became thoroughly integrated in the local community; their interest in local organisations and events was reflected in their membership of various committees and the support and encouragement they gave. They also maintained an Indian identity and kept links with the Indian community in London , becoming founder members of the Hindu Association of Great Britain, The Punjabi Society and the India Club. My mother participated in the campaign for Indian independence.

Tragically, my father died suddenly in Billericay Hospital on 30th December 1959 from a cerebral haemorrhage. He was only 57 years old. People in Laindon were shocked and distressed by this great loss to the local community. I recall seeing crowds of people standing still on the pavement in the High Road as the funeral cortege drove by on its way to Southend Crematorium where again there were so many mourners that some had to stand outside.   Among the many letters of condolence was one which said “he was deeply loved by thousands of people in the district where he had made his home, many of them enjoying life today because of his skill and self-sacrificing sense of duty….to have come from far away to settle in a strange land and then to have earned such a universal measure of esteem and affection is a tribute to the worthiness of a man who will not be forgotten.”

Chowdhary County Primary School was built in 1966, seven years after his death and named after him by popular demand. The inscription on the plaque read: “To honour the memory of Dr Dharm Sheel Chowdhary who gave devoted service to the people of Laindon and the local schools throughout the period from 1931 – 1959.”  The school was closed in July 1996 due to falling numbers and decay of the 1960s building. After my mother’s death in January 1996, a service in memory of both my parents took place in St Nicholas Church on 19th April of that year.  Many of the Chowdhary School children attended.

My father’s life and achievements have been a great inspiration to many not least myself and it is heartening to know that there is still interest in hearing about his life and that his memory lives on in our hearts.