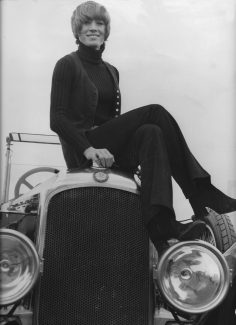 Sandy, sometimes known as Pearl, was a keen member of Laindon’s “Revellers Concert Party” and performed along with other members of her family in many productions at the Memorial Hall and other venues as an all-round singer, dancer and actress.  Later she joined Dougie Squires’ dance troupe The Young Generation followed by The Second Generation.

She could often be seen on our TV screens on Saturday evenings in the early seventies singing and dancing on various variety programmes.  There are a few clips on “YouTube”, here are three of them:-

In the first clip “Pretty For Me”, where she is introduced as Sandy Penson and can be seen dancing in a gold dress:-

The next two clips are from a show produced by Dougie Squires called “2Gs and the Pop People” which ran from 10th June 1972 to the end of July 1972.  The first is a tribute to the Eurovision Song Contest and Sandy can be seen as Pearl Carr singing ‘Sing Little Birdie’:-

The last clip is from the same shows and features the pop group “Slade” performing “Take Me Bak ‘Ome” with girl dancers shadowing their dance movements.  Sandy is shown shadowing Dave Hill and goodness didn’t he make her work hard!  Around that time, Sandy appeared with Slade on the front cover of the TV Guide, The Radio Times.  Unfortunately, I didn’t keep my copy and I haven’t yet been able to track down a photo of the front cover:-

Wherever she is today, let’s hope she is keeping well and enjoying life.