A model/starlet who lodged in Laindon? 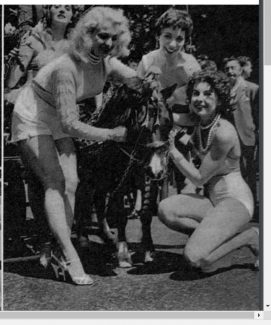 I was told by my sister Anne, that we once had a young fair haired model/actress as a close neighbour.  Her name was Corinne Gray (or Grey) and she lived for a while with her family at South View which was half of the semi-detached farmhouse Sunny Mead which was on the unmade part of King Edward Road.  My sister used to see her walking along the track in Alexandra Road, between the bungalows ‘Rosedene’ and our grandparent’s bungalow ‘Pendennis’, which led to the farmhouse.  She didn’t live there for long, maybe a year or two, just slightly before my memory can recall.

I recently watched a film called ‘Fire Maidens from Outer Space’ which was made in 1956.  Corinne Gray is listed in the cast, playing one of the fire maidens.  I decided to do some research.  I assume that Corinne Gray/Grey was her stage name.  I looked on the 1951 Electoral Register and found the Mitchell family in residence in South View.  I can recall this family from when I was about 5 years old and know they didn’t have a daughter of Corinne’s age, so I looked a little further back to the 1949 Electoral Register and found Mr Leonard and Mrs Kathleen M Bell in residence.   Their daughter Joan Kathleen Bell would have been 18 at that time and could well have been Corinne Gray/Grey.

While searching the newspaper archives I found a few references and photos of her.  An edition of ‘The Sketch’ dated 27th July 1955 shows a photograph of her at the London Soho Fair with Joyce Hunt, Kaye Hallowes and Jillian Banks and a tiny pony from the Visual Arts Club’s float.  Corinne is the blond girl.

In January 1956, Corinne was chosen to stand in for ‘Sabrina’ in one episode of Arthur Askey’s TV show ‘Home James’.    Apparently Corinne said “I have deputised for Sabrina before — though my 36-inch bust doesn’t compare with hers.”  Corinne also appeared on TV as herself in one episode of ‘Northern Showground’ 1956 and also at a fete in Lancaster as per the following advertisement:-

My research then hit a brick wall.  I wonder if anyone ever recalls seeing or knowing her or her family while they were living in Laindon?