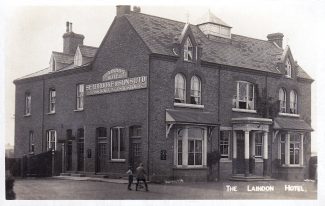 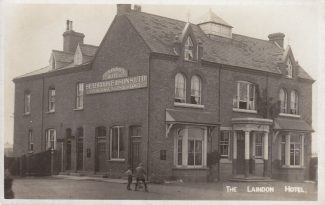 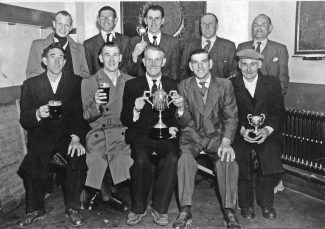 I was born in 1924 in Custom House, Albert Docks, East London. In 1938, when I was 14 years old I was working as a apprentice in cabinet making earning ten shillings a week in Hackney. My father was an inspector of arms. The Woolwich Arsenal was bombed (making it dangerous to live in London) so a friend of my father got me a job at the Laindon Hotel in 1941, I was 17 years of age.

I was given free meals and free lodging and a small wage. My main job was setting up the tables but I also worked behind the bar serving drinks, should not have done because I was under age.

The Laindon Hotel had only a few rooms available for guests to stay, it was more a club with a bar where people would meet. Concerts were regularly held there they became know locally as Sods Operas. The room held about 80 people who would be entertained by comedians, dancers, musicians and various cabaret acts.

Jack Holman was the governor and held regular ‘meetings’ round a large table. Local shopkeepers would attend, among them was Mr Toomey and his 2 sons (they owned a small garage) and Mr Bassett, who had a hardware shop nearby that would sell various things.

The Freemasons held meetings on the first floor about once a month.

I only worked at the hotel for about 9 months to a year before leaving to join the Navy in late 1942 when I was 18.

After coming out of the Navy, I secured a job on ten shillings a week as a carpenter in Hackney, later I would travel down to Basildon with the building firm and worked on many of the new houses being built. I also remember working on one of the New Schools to be built ‘Swan Mead’.

Soon afterwards in 1951 my wife (Iris) and I were given a house in Redgrave Road, Vange. We were the 23rd family to move in and we are still there today.

I then got a job at Carreras, while working there I used to return to the Laindon Hotel with a couple of colleagues who use to play the Drums and Piano and I would sing Ballads. I appeared in a play at the Towngate theatre called Boerthals Hill, the old Anglo Saxon name for Basildon, in celebration of the 40th anniversary of the new town.

The hotel fell into ruin and was later destroyed by fire.

Laindon Hotel was built in 1896 at a cost of £3310 and the architect was a T.T.Matthews of London. It was part of the plan to having a thriving racecourse at Laindon. Though it appears that a course was laid out with a fence round it only a few races actually took place and when the proprietor of the Hotel, Alfred Paul, died in the early 1900s the course disappeared.

However, the Laindon Hotel became a hive of activity with fairs, School sports and football, all competing on the ground at the rear of the Hotel.

Bowls were played at the side of the hotel. It finally fell empty in the late 1980s and was demolished in 1991 after a number of arson attacks.

Laindon Lodge (Freemason) was officially formed at a meeting that took place in the Laindon Hotel on the 1st February 1930. There were initially 12 founder members, Jack Holman being one of them.

By the third meeting at the Hotel, three further founder members were added and the Lodge motto “Dante Qui Je Puis” (As much as I can I will) was adopted. By the time of the October meeting they had received their warrant and their number 5230.

Note by Editor:  Plans were in hand to refurbish Laindon Hotel prior to the fire, but were abandoned as a result of the arson attack, that made the costs inhibitive.