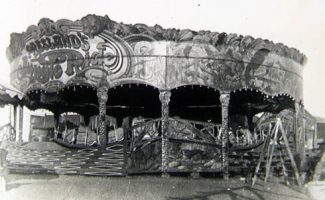 zoom
Presland's - The Jungle Ride. The National Fairgounrd Archive.
"Reproduced with permission of the University of Sheffield" 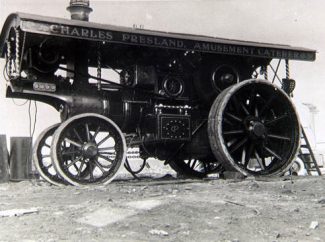 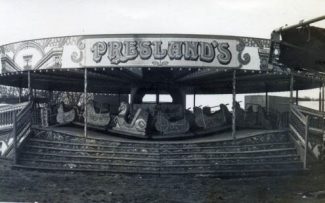 zoom
Presland's - The Ark. The National Fairground Archive.
"Reproduced with permission of the University of Sheffield"

Presland’s fair that used to park every year in the field off Denbigh Road, Laindon has been mentioned once or twice.  I have been doing a little delving and have found that this fair was run by the Presland family who originated from Deptford, Kent and later appear to have been based in Tilbury.

I have found some online records of the family plus some photographs of the fair on various websites.The records show that Charles Davison Presland was born 4th October 1865. (Davison being his grandmother’s maiden name). His father, born 1843, was also named Charles Davison Presland, and married Elizabeth Maddock in 1865.  His grandfather John Presland married Rebecca Davison in 1822.

In a newspaper interview which was published in 1945, Charles explained that his Grandfather John, had owned a little periscope which he used to take around fairs to get a better view.  He got himself a small roundabout which he pushed around by hand (a novelty at the time).  So the family show started off in a small way and eventually Charles inherited it from his father.  Charles had six sisters and five brothers, but he was the only one of them who carried on the family’s traditional business.

Charles older sister, Elizabeth Mary, was married in 1893.  Her father’s occupation at that time is shown as ‘a traveler’ which indicates the family’s involvement with the fair.

During the 40s, Charles had been the owner of a steam engine called Princess Mary, Burrell 8nhp, built for a William Nicholls of Forest Gate, Essex in 1923.If you go into the following link and scroll down, you will see photos of Presland’s Fair at Earl’s Colne Show, where they used to park up at the edge of the cricket field.  Also a photo of ‘Princess Mary’ pulling a row of trailers.

I wonder did anyone see this wondrous sight when the fair came into Laindon?

I’m not certain what remains of the business today, but when I ‘googled’, I found the following address:  Presland Amusements, Fairground, St. Chads Road, TILBURY, RM18 8NL.  Maybe a little more delving may be required.