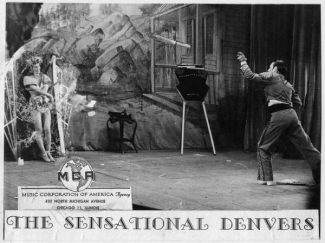 zoom
The National Fairground Archive.
"Reproduced with permission of the University of Sheffield" 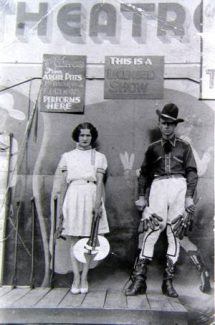 zoom
Hal Denver and his assistant holding their knives. The National Fairground Archive.
"Reproduced with permission of the University of Sheffield"

During the forties, in addition to regular visits by Presland’s Travelling Fair, on at least one occasion Laindon enjoyed the spectacle of a circus.

I was recently told a story of an incident that occurred involving a knife throwing act.  It’s unknown exactly where the ‘big top’ had been erected in Laindon, but during a knife throwing act, the lady assistant was hit in the leg by a knife and rushed to hospital.  Apparently there was ‘blood everywhere’.  The incident was reported in the press.  The Knife Thrower was Hal Denver and the incident happened in 1948.  I found a small article from  ‘The Argos’ (Melbourne) which reads as follows:

Three thousand spectators at a circus at Laindon, Essex, gasped with horror when a knife thrown by Hal Denver, who was blindfolded, struck his wife in the right leg and made a deep gash in it.

The woman was taken to hospital, where the wound was stitched.

She returned to the circus with the leg bandaged and told some of the other performers that she would not let the accident unnerve her.

I’m sure we would be most interested to hear from anyone who happened to be at that performance and anything they can remember about it.Apparently somewhere there is a newspaper cutting from ‘The Performer’ dated 29/7/1948  advertising the availability of the Knife Throwing Denvers in the near future, with a photograph, and featuring headlines from recent newspapers which refer to an accident to Ella Denver during the act 1948. (Perhaps it was thought that pointing out and emphasising the dangerous nature of the act might attract an even larger audience).

For anyone interested in further information about Hal Denver, I attach the following link:- http://www.independent.co.uk/news/people/obituary-hal-denver-1384050.html