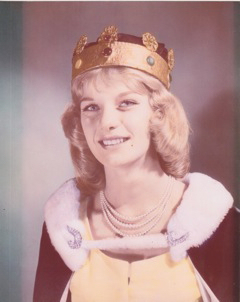 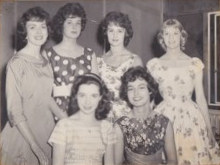 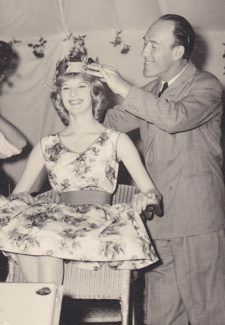 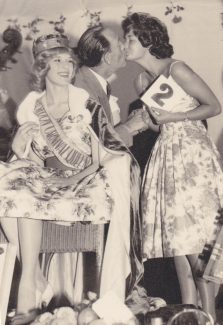 zoom
A kiss for the runner-up. 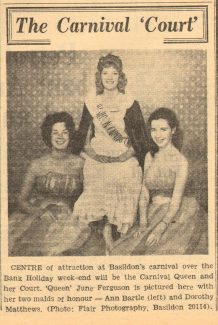 zoom
The new Queen and her Court. 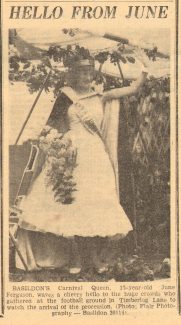 zoom
The Queen on her Carnival Float. 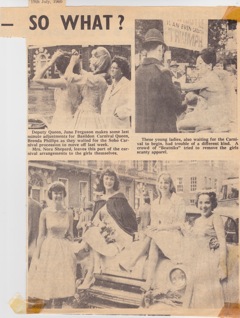 zoom
Riding on the bonnet at the Soho Fair.

Reading through the local papers for 1959, it seems that plans for the Carnival Queen competition started as early as January.  Entry forms were available from April and had to be completed and returned by 16th May.  Eventually 43 entries were received but 13 girls dropped out before the competition began.

In the meantime, another Queen was crowned in the spring that year.  Margaret Lindsey was chosen as Laindon’s May Queen at the Laindon and District Guides’ May Festival at Laindon High Road School.

Margaret was crowned by last year’s May Queen, Mavis Seager, who was presented with a brooch by Mrs P Carter, a previous May Queen of some 22 years earlier.  Jessie Henandez represented Spring and the Maids of Honour were Pat Pattle and Susanne Young.  The ceremony was followed by dancing in varying styles including, Maypole dancing, Morris dancing and various other country dances.

Carnival Chairman Jack Shepard announced that £1,000 had been targeted for this year’s Carnival.  The float would have a garden theme with the Queen seated on a floral swing.

Final judging took place at Laindon Community Centre on 11th July.  Richard Hearn (Mr Pastry) had originally been approached to perform the crowning ceremony but unfortunately had to decline due to previous commitments to various charities.  However, Tommy Trinder was available and happily accepted the invitation.

June Ferguson was voted the winner and duly crowned Queen, thus beginning her well-deserved and very busy reign.  In her own words:-

In 1959 I was Basildon Carnival Queen and had Dorothy Matthews and Ann Bartle (whose sister Joan was Queen the previous year) as my Princesses. I was crowned at the then new community hall in Laindon by Tommy Trinder.

I had dozens of prizes that were donated by all the new shops in Basildon including jewellery, a bouquet of flowers every week for a year, dresses from Ambers in East Walk, shoes and a made-to-measure tailored suit from Austin’s Taylors.

This carnival procession was also headed by Billy Foyle on “King” his palomino. I met many famous people Gordon Pirie, Adam Faith and Frederick Bartman who played Simon Forrester in “Emergency Ward 10” which was a great hit on TV at that time.

The crowning ceremony and many other fund raising events took place in the “New” Laindon Community Centre but not the one that is there now.

I was also asked to be the “Spirit of 1960”, and there was talk of me jumping out of a large cake at midnight but in the end I was in a ballet outfit on a swing on the stage when a Scott’s Guardsman played the New Year in on the bagpipes.

I did many fundraisers in my year as Queen and I also met Jill Ireland (she later married Charles Bronson) and David McCullum who were a young married couple then, and it was my job to look after them for the day. Jack Shepard who was head of the Carnival Committee had a wife, Nora who had a new shop selling china and fancy goods and the couple officially opened it for them and after in the evening there was a dance in a hall above what used to be Halfords store in Basildon town centre which was on the corner opposite the now Wilkinson’s store.

There were not many weekends when I did not attend a function. I normally had to make a speech to encourage people to give generously, and I was usually told in advance who they were collecting for but occasionally I was told there would not be a speech, but after the committee had had a few drinks I would still be asked to get on the stage so I quickly learned to improvise and thank all the organisers for the good work they were doing!  At the end of my year, the Queen that followed me was married and found it difficult to attend, so as her deputy, I did nearly as many events that year too. I would usually be picked up from my house in an enormous American Limo which was supplied by Frank Warr from Pitsea which had all the neighbours out to watch. My favourite event was the Soho Fair, we had such a great day and we did the route sitting on the hood of the car with our stiletto heels behind the bumper to stop us sliding off. At the end the hood was very hot and uncomfortable. There was no “Health & Safety” then!!

Congratulations and very well done June.  Thank you very much for all the hard work and effort you put in during your reign, especially that which was over and above the call of duty.   I’m sure we all agree that our Laindon Girl did us proud.