In November 2010 I met Steve Boreenatra wandering around St Nicholas churchyard with a clipboard and camera. He was checking out the war graves and looking for private war memorials.  I pointed one out that I had found one only a few weeks earlier when I was clearing an area at the front of the church on the bend of the disabled path. 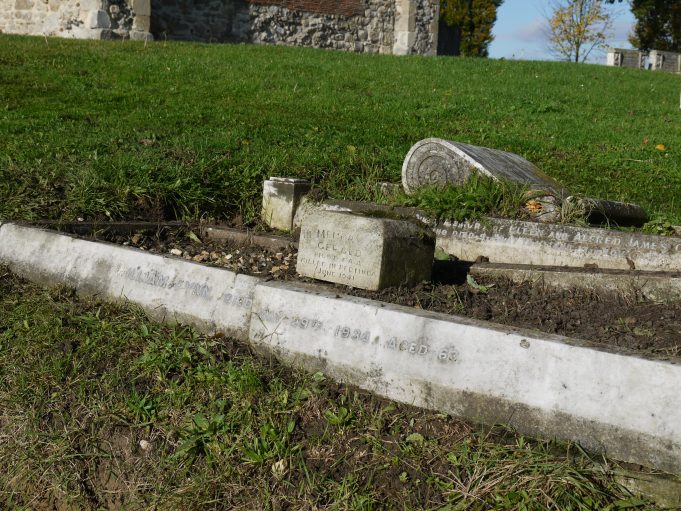 Grave of William Fynn with the stone commemorating Gerald

In Memory of Gerald

He agreed to try and find out who Gerald was. It did not take him long – he was back with the information that evening. His full name was Gerald Harper Fynn, he died at the age of 25 on the 17th June 1941. He was a Petty Officer Airman attached to H.M.S. Malabar. His parents were William and Louise Fynn who owned the grocers shop in Basildon Road.

The memorial stone had been hidden under the long grass and did not appear to be attached to any particular grave, so I decided to check the death records to see if I could find any reference to him and his parents. Well luck was on my side, I found the burial record of both his mother and father and a reference to him. Luck again was on my side because I found the grave on the other side of the pathway and there was a stone slab in the middle of the grave. This I believe is where Gerald’s memorial stone was originally placed. I have tidied up the grave and replaced the memorial stone.

His official War Memorial appears on the Lee-on-the-Solent, Hampshire, Fleet Air Arm Memorial. The memorial consists of a rectangular column of Portland stone bearing the inscription:

THESE OFFICERS AND MEN OF THE FLEET AIR ARM DIED IN THE SERVICE OF THEIR COUNTRY AND HAVE NO GRAVE BUT THE SEA . 1939-1945

HMS Malabar was not a ship but was a base on Boaz Island, Bermuda for the Royal Navy’s Fleet Air Arm (FAA). In the early years of the Second World War the base was used for the maintenance and storage of aeroplanes.

However, air cover became an immediate requirement as the Colony resumed its Great War role as a staging area for the formation of trans-Atlantic convoys. Air patrols were vital to combating the threat of German U-boats.

For me a further interesting twist to the story is that I played cricket with possibly his nephews Geoff and Brian Fynn who both lived above the grocer’s shop in Basildon Road. We played for Laindon at the back of the Basildon Country Club in Basildon Road. This shop must have been one of the earliest in the area as Gerald’s parents were living there at the time of the 1911 census. Is there anybody who remembers the shop or the family?