Pre war and the War Years, memories of people and places 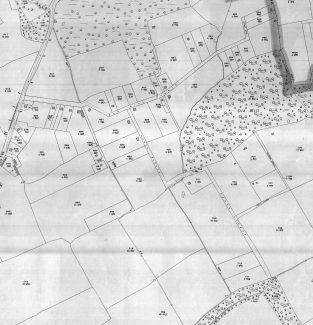 At the junction of South Hill and Old Hill Avenue was a plot of ground belonging to an East Ham Mission. They had hoped to build a mission hall there. On the plot of land next to it on the main road was a small garage belonging to Mr Veryard.

Travelling Eastwards along Old Hill Avenue, most of the dwellings were on the right hand side. First a bungalow where Mr & Mrs Veryard lived. Then came Meadow Drive, which went South for a while before turning east, here there were two houses opposite to each other owned by Mr & Mrs Vickers and Mr & Mrs Abbott. I cannot remember the name of the second bungalow in Old Hill Avenue or the people who lived there. Next came the home of the Chimney Sweep Mr Sewell. I remember him and both his first and second wives very well. His second wife was a seamstress, who made University gowns, and the work involved was amazing.

Next came the only house on the road, the farm house of Sutton Hall Farm. The land was farmed by Mr Sibun. He was a dairy farmer and sold milk which was bottled on the premises. After Mr Sibun it was owned by Mr and Mrs Popham who were in a dance band that played in the hall at the back of the Crown. We were allowed to go to the dances when they were playing there as they would see us home. Next to this was a right of way leading to the farm land beyond. This right of way, is mistakenly known as Meadow Drive. The one dwelling, a 1914 army hut which appears to be along the right of way was a property built on the rear of ground in South Avenue. Mr Mick Harris lived here with his nephews and nieces by the name of Walmsley. Several of their descendants still live within the locality.

Returning to Old Hill Avenue we come to a property ‘Carrisbrook’ owned by Mr & Mrs Fox. Until that point Old Hill Avenue had a hard core road, allowing traffic to reach the farm. After came the unmade part. Opposite ‘Carrisbrook’ came the first bungalow on the left hand side of the road, known as ‘Nyasa’. A small three bedroomed bungalow with a lean-to kitchen. It had been exhibited at the 1926 Wembley Exhibition. A family by the name of Hatcher lived there, there were several sons and a number of them went into the Navy. Following them, the house was inhabited by Arthur & Rene Sibun, Alf & Win Andrews, then Stan and Win Tinworth (each year a pair of larks nested in the grounds). Continuing along the right hand side of the road, the land belonging to ‘Carrisbrook’ finished at the corner of South Avenue. Across South Avenue we came to ‘Deneburn’ the home of a retired Policeman. His name was Mr Buckingham, he was disabled but when we clubbed together to make a foot path, he acted as out treasurer and co-ordinator. Next came some vacant land, then a bungalow, Liskeard, the two sisters who lived there were Cornish. Next was a right of way leading to the ‘Old Hill’. Then ‘Mid-field’ owned by Mrs Clarenbold. This property consisted of about 5 acres of Land.

Up to this point all properties had permanent residents. After this came a mixture of weekenders with dwellings of various shapes and sizes and permanent residents. Opposite ‘Deneburn’ and Liskeard were three plots of ground. one known as ‘Green Trees’ was owned by Mr Matt Green and the next plot by Mr Pete Green (no relation). Mr Pete Green a friend of ours from Bow hoped to build, but permission was not granted. Each spring this plot was covered with purple Orchids.

Next came the right of way to ‘Kilima Banda’ on the left hand side going up was the pig sty a large area of trees and brambles where the pigs owned by Mr Brooks JP had freedom to roam. There were brick built pig sties on the northern edge of the field. Coming back down the right of way was a plot on which stood a shed. When the War Agricultural Committee came along they moved it to the side of the right of way. This belonged to some local people related to Mr & Mrs Eades. Then on the corner with Old Hill Avenue came ‘Hillview’ belonging to Mr & Mrs Burton and Mr & Mrs Whitehead, weekenders from Holloway.

Continuing along Old Hill Avenue on the left hand side we passed several weekend plots until we came to ‘Outspan’, a small two roomed bungalow connected by a verandah. Mr Sparks, who lived there, caused quite a scandal, when he was known as the naked man of Old Hill Avenue. Actually he was a keen gardener, so his body was the same shade as his khaki shorts. His garden was most interesting and to us children exciting. There was one path that went straight from his house to the gate, a great distance of over eighty yards. To the left of this path was his vegetable plot and orchard. Then there was a pathway full of twists and turns, a crooked path, he referred to them as the two paths of life. The curved path was surprising because hidden at each turn was a surprise such as a bird bath, a fish pond, a rockery, a statue etc. As children we use to race each other along the paths. Guess who always won.

‘Outspan, was bought by Mr Peter Green and members of his family and step family (The Frosts) stayed there during the war. Next came another plot followed by a pathway, next to a ditch, which allowed folk to walk to a pond to collect water. On the other side of the ditch, on the right hand side, close to the ‘Old Hill’, a bungalow called ‘Alma’ owned by Mrs Hinds, another neighbour from Bow. Again during the war years many of her family lived there. One of her sons played the accordion, and it was very pleasant to hear the music drifting across the fields.

At the end of the Avenue was a large field on which stood three properties. One owned by Mr & Mrs Loom and another owned by Mr Howell or the East Ham Mission. They often had groups of young people camping there and we were invited to join their services and campfires. Again the sound of music drifting across the fields was most pleasant. I do not know who owned the third property. These three houses were built along the top of the hill, facing in a westerly direction.

Returning to, and walking along South Avenue, there were three properties on the right hand side. One belonging to Mr Redall, who also owned ‘Old Hill’. He was not a permanent resident and he gave us all permission to go onto the Old Hill except when he was visiting, and we knew this, by the usual signal of the weekend folk, he would fly the flag. Eventually the house was sold to Mr Pilgrim, another retired Policeman. Another property, ‘Timasham’, belonged to Mr & Mrs Mills and their daughter Margaret. Mrs Mills was sister to Mrs Whitehead and Mrs Burton. The third property, I have already mentioned was owned by Mr Mick Harris.

South Avenue then had a bend, whether this was the start of Central Avenue or whether this was further up I do not know. On the bend was a bungalow the home of Mr & Mrs Ferrier. To reach this property it was necessary to cross a bridge, over a wide deep ditch (A tributary of the Hassenbrook). Going up the hill, backing onto ‘Old Hill’ were ‘Milo’ and ‘The Briars’. These belonged to the Mayard family. Going South there was Central Avenue and several weekend plots. One called ‘Kenwood’ was the home of Mrs Bass and her daughter, Mrs Bass became Mrs Pilgrim. Central Avenue lead down to Cawder Hall Farm, Corringham

Although not really in Old Hill Avenue the third house from the Avenue on South Hill was derelict and known as the haunted house, yes moans, groans and various noises could be heard. It was regularly used by tramps walking between Orsett and Billericay.